Releasing Their Debut Single ‘Doo What’

And The Album ‘Oubilette’ – Both On 8th July

Five unrelenting journeymen with an education in life’s hard-learned lessons, The Drifting Classroom, are readying themselves to loom eternal in the halls of  primary colour pop as they release their debut album on 8th July 2016.   Full of heart and bittersweet observation, the album’s first single ‘Doo What’ will also be released on the 8th July.

Undoubtedly pupils of the Golden Age of songwriting, the band borrow playful  inspiration from the craft of Seventies classicism and sumptuous instrumentation of baroque-pop greats. The Drifting Classroom seize on the swooning vibes of ELO, the playful songwriting sensibilities of Squeeze and the sunshine gilded melodies of Bowie or Andrew Gold to create an album fizzing with a heady chemistry. However, this band offers much more than a cursory glance over the shoulder of pop history’s prefects…

After earning a host high-profile plaudits from the music world including Paul Heaton [Beautiful South] and Alex James [Blur], and even catching the attention of producer Adrian Sherwood (who has lent his talents to a unique remix of ‘Japanese Film’), The Drifting Classroom’s charming and singular sound made an instant  impact with taste-making Manchester imprint – Skinny Dog Records – a label founded by Elbow’s Guy Garvey and Pete Jobson of I Am Kloot.

Forming from the ashes of Marc Sunderland’s previous musical vehicle, the  critically acclaimed Peter & the Wolf, and the coincidental calling of each member to pastures new, the five-piece soon found themselves drifting into each other’s timelines. Drawn by their shared tastes and experiences in music and beyond and finding shared solace in the city of Liverpool, the band set about forging the 12 songs that would become: ’Oubliette’.

Tender self-reflection and melodramatic conclusions are inevitably made on this  defiant journey of spiritual redemption. Following the band’s turbulent formation which necessitated line-up changes and abandoned singles and EPs, The Drifting Classroom’s debut has been a long time coming but is every bit worth the wait.   Modestly recorded on drummer Allan Falcon’s laptop in the spare room of keys player Richie Jones in Liverpool, and in the front room of vocalist Marc  Sunderland’s childhood Blackpool home, the production is understandably rich in charm and sizzling with on-location timbres.

Extensive use of all mod-cons, your Google Drive and Dropbox, saw bass and  guitar parts added remotely by Max Barker and Simon Morgan, followed by marathon production and mixing sessions at weekends in Simon’s spare room.

With an overwhelming love of vinyl as a musical format (thanks to Richie’s  staggering record collection), the album has been produced with this medium in mind, in the style of the band’s favourite late 60’s / early 70’s Golden Age records.

The stunning cover artwork was inspired by Dutch Master still-lives, an Al Capone prison cell and ‘listening to too much Pink Floyd’. Created and photographed in Amsterdam by some of the band’s exceptionally talented friends, the scene and  associated artwork depicts the album’s lyrical themes. The album was originally to be self-titled, until discussion of the final photographed scene led to the christening of the ‘Oubliette’. 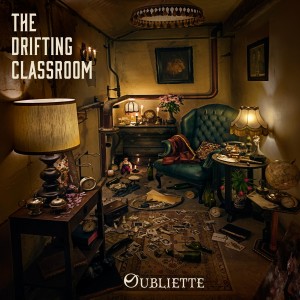 THE DRIFTING CLASSROOM ARE:

After successful warm-up shows at The Cavern and Smithdown Road Festival, the band will formally launch the record at Night & Day Cafe on Wednesday July 6.